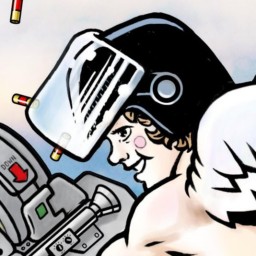 Welcome to the Aces Gallery for HISTORY KARDS: 50 GREATEST VILLAINS OF ALL TIME, where you can see the cards large enough to make out text and graphics. Klik "MORE ON THE ACES" below for additional info, or klik on any image to see it bigger.

Meet the worst of the worst (The Greatest!) of our ugly little "family" of mass murderers and monsters, the Aces! The big surprise for most is that my "mass murder metrics"—the mathematical means by which I ranked these killers—indicates someone most folks today have never heard of. Or, if they have heard of him, they have no reason to include him in such exclusive (ahem) company.

I'm speaking of the god-like, unquestioned ruler of Japan, Emperor Hirohito, who signed off on large scale slaughter every bit as horrific as anything the Nazis did. And worse yet, it went on for the better part of a decade before war broke out in Europe—thus giving the brutal Japanese much more time to commit wide-scale war crimes and mass slaughter.

Interestingly enough, the ideology which powered this carnage was not dissimilar to that of the Nazis; the Japanese believed they were the master race and had every right to impose their will on the "subhumans" unfortunate enough to be overrun. Sound familiar?

Some historians believe that WWII began much earlier than is commonly understood. To this camp, WWII did not begin with the German conquest of Poland in 1939. Rather, it began with the Imperial Japanese invasion of Manchuria in 1931 and further attacks/invasions across all of Southeast Asia in the years following.

Study the behavior of the Imperial Japanese conquerors, and you'll begin to wonder if Hitler, Stalin and Mao didn't take their inspiration from the East, and if Hirohito hasn't gotten his full due. The atrocities committed by the Japanese were truly appalling. I try to correct that injustice in History Kards.

In a strange coincidence (and I don't think it's more than that), the swastika of the Nazis is actually an ancient sign of good luck and fortune from the East. Nearly every astute person knows that Mao Zedong, Joseph Stalin and Adolf Hitler comprise a very special trio, all with links to the pre-WWII world and, with the exception of Hitler, well beyond. But there is one particular villain at this level whom most people never think about and, indeed, are often completely unfamiliar with, even though his crimes stand out in the annals of carnage for being on a truly epic scale and akin to his infamous rank-mates.

Like Chairmen Mao and Stalin, this ruler held absolute power across many decades and was never seriously challenged from within. This might have been because his subjects fervently believed his rule divine and decreed by the gods themselves. This was a status his rivals must surely have envied, because the inviolability of his office and station went far beyond fear; his rule was an unquestioned article of faith. What ruler doesn't want his subjects (i.e. slaves) to completely believe in his absolute, unchanging, evermore inevitability and infallibility?

This unassailable and unquestioned ruler was none other than Emperor Hirohito of Japan, whose armies committed widespread atrocities and mass slaughter in his name all across Asia and the Pacific region before and during WWII. This unprecedented tsunami of death and destruction places him squarely among the worst of the worst. Strangely, despite the scope and scale of his legacy of horror, he has largely escaped the verdict of history.

Some say this is because he was rarely seen, even by the Japanese—a shadowy, aloof figure one prayed in the name of but never expected to see. Others, because he did not fit the image of the other tyrants of his era. Hirohito was cultured and reserved. He was not perceived as a thuggish egomaniac or ruthless fanatic.

But as the numbers show, the carnage done in his name and with his approval puts him in the same rare company as the other far more infamous Aces.

Emperor Hirohito may have escaped the verdict of the court of public opinion, and perhaps, to some extent, that of academics and politicians, but he does not escape the judgment of HISTORY KARDS.