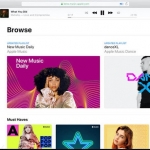 Apple has been teasing it for a while now, but it looks like the time is upon us to soon see the end of iTunes as it’s new music site enters public Beta.