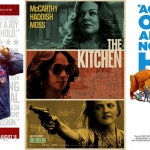 For a very long time, I thought that Lego and Playmobil was the same thing. Unfortunately for Playmobil, they’re not, and it looks like they can’t match the massive success that The Lego Movies have had.

As originally seen on Critical Hit!
Movies out Today: 16 August 2019